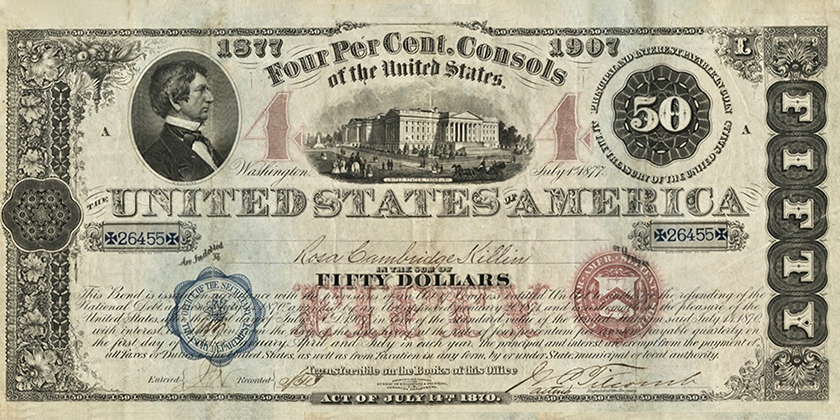 “We are actively competing with nations who openly cut interest rates so that now many are actually getting paid when they pay off their loan, known as negative interest. Who ever heard of such a thing? Give me some of that. GIVE ME SOME OF THAT MONEY. I WANT SOME OF THAT MONEY.”

If President Trump had his way, the US would be sporting significantly negative rates right now. While there is wide-ranging disagreement on the long-term impact of negative interest rates 2 – good, bad or neutral – there is growing acceptance that negative interest rates are the ‘new normal’ with 30% of the world’s government bonds trading at sub-zero yields, as illustrated in the table below.

Negative Rates and Ultra-Long-Term Bonds
For Wall Street’s bond-pricing models, negative interest rates mostly have been no big deal; the same code usually works just fine when yields are negative instead of positive.3 But there is at least one exception, a bond type that cannot abide a negative yield: the Consol bond.4 Even though governments don’t issue them anymore, they’re one of the simplest and oldest of all bonds. Also known as Perpetuities, these bonds provide the holder with a fixed interest payment each year in perpetuity. They were issued and re-issued by governments such as the UK, France and the US, and were often the market’s largest and most actively-traded issues. The UK retired their last Consol bonds in 2015, and today there are virtually no government-issued perpetual bonds outstanding. However, there are plenty of other perpetual or near-perpetual cash flow streams investors can buy, and recently issued sovereign bonds with maturities of 50 to 100 years may feel like near-perpetual offerings to many investors.

The basic formula for the price of a perpetual is simple:

The chart below illustrates the relationship between the price and yield of a perpetuity and annuities with different maturities. Notice how extremely convex these curves become at very low interest rates. This kind of convexity is generally an attractive characteristic for buyers of such investments, and a terrifying one for short-sellers. 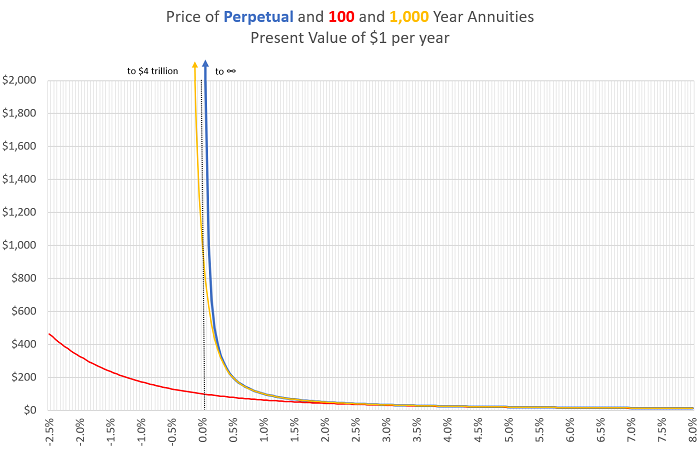 To avoid having to deal directly with infinity – clearly a price that no-one would be willing or able to pay – we’ll consider a 1,000-year annuity paying $1 per year, rather than a Perpetuity. If we know interest rates are fixed for the next 1,000 years, we can easily calculate and see the annuity’s price on the chart above, but what’s a reasonable fair price given some uncertainty in interest rates? Let’s approximate this value by imagining 1,000 different interest-rate scenarios. Let’s say that, in 999 scenarios, interest rates will equal 2%. But in just one scenario, we’ll assume rates will instead average -1%, in the spirit of the ‘new-normal’ for interest rates and the possibility that interest rates can be negative for sustained periods of time in the future. The Expected Value of the annuity is the probability-weighted average of the Values of the annuity that result from those scenarios, producing a result which is pretty remarkable:

A Potential Perpetuity Paradox
What we’re calling the Perpetuity Paradox is the conundrum facing a person who simultaneously believes that there’s a small chance negative interest rates can persist for long periods of time, but would not pay a price anywhere close to the $2,366 Expected Value of the annuity for more than a de minimis amount. We are not claiming that most people hold these beliefs…but if you do (and we don’t think it’s unreasonable to do so) then you’ve got a paradox on your hands.

In working with Expected Utility, we’re going to assume a level of risk aversion typical of 30 of our investors we surveyed a year ago. We find that even at a price of just $51 for the annuity a typical investor would optimally invest only 1/2000th (0.05%) of her wealth, even though the price represents a 98% discount to Expected Value.7 Much closer to the Expected Value of $2,366, a price of $2,100 merits an optimal investment of only 1/10,000th (0.01%) of wealth. Thus, we can see the Expected Utility line of reasoning presents one resolution to the ‘paradox’: even though the small possibility of negative rates makes the ‘gamble’ on the annuity highly valuable, an ordinary investor wouldn’t bet more than a tiny fraction of wealth on it. Sadly, the UK government can forget about issuing one 1-Pound-per-year inflation-indexed Perpetuity to pay off the entire national debt!

Conclusion
We can’t say how long the new-normal of negative interest rates will continue – but given the negative long-term nominal and real rates we see in a number of major economies, it seems difficult to dismiss negative rates as just a fleeting phenomenon. That means it’s worth seriously thinking through the issues involved in valuing and investing in long-lived cash-flow streams, whether arising from government bonds, real estate or equities, near and below the zero interest rate frontier.

Regardless of your position on negative interest rates, we hope this note has illustrated two important and intriguing considerations that impact many important investment decisions under uncertainty:

Appendix: Using a Probabilistic Interest Rate Model to Put a Value on a Near-Perpetuity
It’s hard to describe how far-out the idea of negative interest rates has been to economists and market participants throughout history. What would Sidney Homer, co-author of the 4,000 year survey “A History of Interest Rates” and Salomon Brother’s first director of Bond Research, have made of UK investors’ locking in a 65% loss in the purchasing power of their savings by buying 50-year inflation-linked bond at a yield of -2.03%? 8 Influential economists and philosophers through the ages, including Marshall, Fisher, von Mises, Hicks, Hayek, Knight, Keynes and Friedman, all wrote books and articles proposing differing theories of interest rates. One common thread was that none of them envisioned negative interest rates as a realistic phenomenon they needed to explain.

It wasn’t until the late 1970s that economists started to directly embed uncertainty and randomness into interest rate models, thereby taking account of the convexity of discounted cash flows so central to the Perpetuity Paradox we’re discussing. Since then, many stochastic interest rate models have been proposed, including those by Vasicek (1977), Cox-Ingersoll-Ross (1985), Heath-Jarrow-Morton (1989), Black-Derman-Toy (1990) and White-Hull (1990, 2006). For the case at hand, simplicity and familiarity persuaded us to use a model similar to one that we used at Salomon Brothers, called the 2+ model, in the days when banks were allowed to invest their own capital in proprietary trading.9

We’ll use this model to generate 1,000 possible paths for future interest rates, which in turn produce bond prices and corresponding yields. We’ll parameterize the model so that the expected bond prices are roughly consistent with the pricing of German bonds with maturities of 1, 5, 10 and 30 years, taken from Table 1.

Below is a description of the model. An important feature is that it allows the short-term interest rate to go as negative as h:

The chart below shows the value of a $1 a year 1,000-year annuity for each of 1,000 paths we generated with this model, arranged from smallest to largest value, and plotted on a log scale since some of the values are so large. 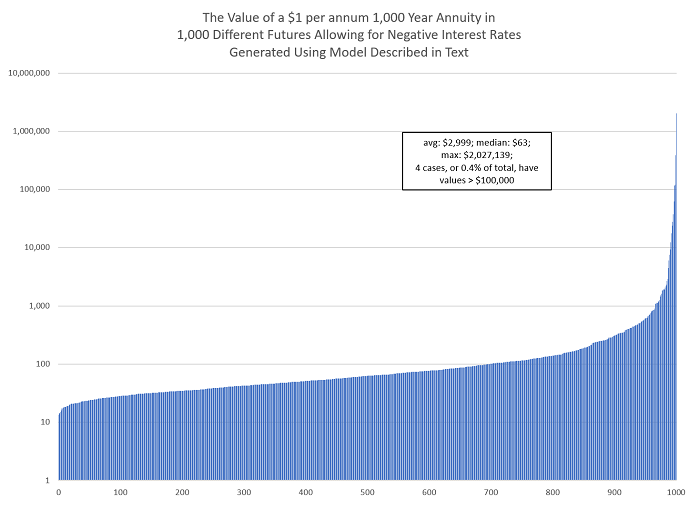 You can see how the Expected Value of the annuity is heavily influenced by a small number of very large expected dollar values, just as we suggested in our two-scenario analysis in the body of the note. This is the distribution of values of the 1,000-year annuity which are consistent with the current market pricing for German government bonds, taking into account the uncertainty around future interest rates and the possibility that interest rates stay negative for prolonged periods, consistent with the new-normal perspective.

As noted above, we are using a no arbitrage model of interest rates for this analysis. This means that in theory, if the 1,000 year annuity were trading at a price below the model price, an arbitrageur could buy it and hedge it with other bonds and make a riskless profit equal to the difference between the market and model price of the annuity. There are significant limitations involved in doing this in practice for such a long horizon asset, including transactions costs and frictions in holding the required highly leveraged long and short positions of the hedge portfolio, the necessity of the particular interest rate model chosen to have a form and parameterization which accurately describes how interest rates evolve in the future and the extremely long horizon involved in forcing convergence to the model.

Alternative interest rate models will produce charts that can look substantially different than the one above. For example, models that assume interest rates will mean-revert to a fixed and pre-known positive level will not produce paths that put such high values on the annuity, but then we’d suggest that such models are not really in the spirit of the new-normal for interest rates. As discussed above, we believe that Expected Utility analysis is the best tool for figuring out what an individual would be willing to pay for this distribution of outcomes, and thereby resolves the apparent paradox of perpetuity pricing in a future that may experience negative interest rates for sustained periods.

UPDATE:
Bloomberg author Brandon Kochkodin wrote a great piece in response to our post on negative interest rates, which you can read by clicking the link below:

Victor also took a moment to talk about negative rates on BloombergTV, watch the full interview below: