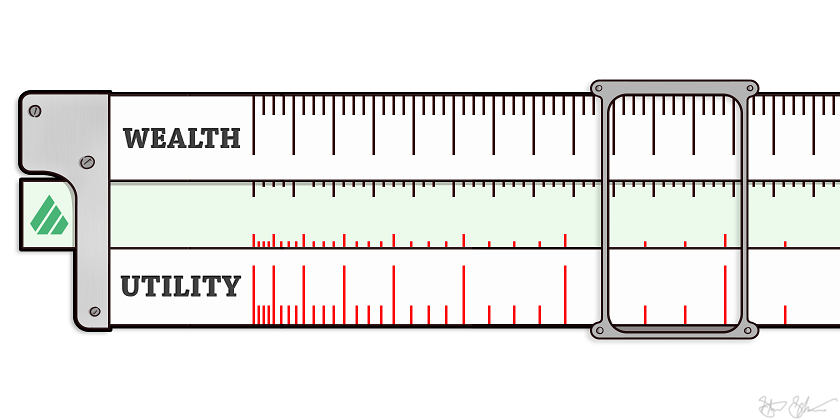 We steer our financial course through life choosing how much to spend and how to invest what’s left, periodically updating our choices as circumstances evolve. This is the essence of financial planning: specifying in advance a desired spending and investment policy conditional on relevant aspects of our life, varying investment opportunities, and our preferences for the benefits derived from our wealth. It’s a pretty simple problem to put into words but finding an optimal solution has occupied some very bright minds for the past 60 years, since Harry Markowitz got the ball rolling with his brilliant but highly-stylized one-period, static portfolio selection paradigm.2 Since then, researchers have made tremendous progress in both specifying and solving increasingly realistic and relevant formulations of this problem, with the goal of maximizing expected lifetime utility at the core of most formulations. In fact, academic research in this area has been so rich that it’s given birth to an entire academic discipline with dedicated university courses and textbooks.3

And yet, even though the study of this problem has delivered novel and valuable insights, we haven’t seen meaningful adoption by the financial planning or wealth management industries. The issue may in part involve the “utility” formulation so common in academia. Utility is a measure of the happiness, or felicity,4 we derive from using our wealth, and researchers generally presume that an investor knows her own “utility function,” which is to say the relationship between her wealth and utility. Unfortunately, sparingly little has been written about how an individual should calibrate her personal utility function. Financial planners may also worry that these relatively stylized academic models of utility don’t adequately represent investor preferences in the real world and fear their clients will be confused by a process grounded in an unfamiliar abstract formalism.

Are these reservations justified? We decided to create a short survey to address this question by testing whether a group of financially-sophisticated investors could comfortably communicate their preferences in a way which we could then translate into utility terms, and whether these preferences are reasonably consistent with core utility concepts. If the responses were affirmative, then we’d have reason to believe that putting the academic research findings into practice could have a big payoff. So, over the past six weeks, we gave the survey to a group of 31 friends and former colleagues from the finance industry.5 We make no claims that results from this selective sample are automatically applicable to broader groups, but we thought it would be a good starting point to see if there’s at least a kernel of people who would be comfortable thinking within this framework.6

Below is the survey.7 As we’ve done before in our research, we framed the survey questions using coin-flipping thought experiments.8 A utility-based framework is built into the structure of the questions, but you’ll see we don’t actually use the word “utility” anywhere in the questions, as we hoped to bring as few preconceptions into the survey as possible. We’d value getting more responses, so please take the survey here if you have a few minutes to give it some thought before reading on.

Before proceeding, we need to explain a little about how we picked the specific values in answers (a)-(e). The family of utility functions most commonly used in the academic literature is called Constant Relative Risk Aversion (CRRA) Utility.9 It’s hard to beat for simplicity, requiring just one parameter: the coefficient of risk aversion. One of the fundamental insights of the utility framework is that an individual’s utility curve defines her risk preferences, and in particular her level of risk aversion. Risk aversion comes from the asymmetry in utility between positive and negative changes in wealth. The parameter which describes the curvature of the utility function (the asymmetry) therefore also describes the level of risk aversion.10

Answers (a)-(e) each reflect one particular level (1, 2, 3, 4 and 5) of risk aversion. So, for example, an individual who displays CRRA Utility with a risk aversion level of 3 would choose answer (c) in all 3 questions. Two “ideal” individuals whose preferences are well represented by CRRA utility and who have the same coefficient of risk aversion would answer our survey in the same way, regardless of their wealth.11

And now to the survey results. In sum, we were encouraged by the responses. You can find the full response data here and summarized in the chart below. 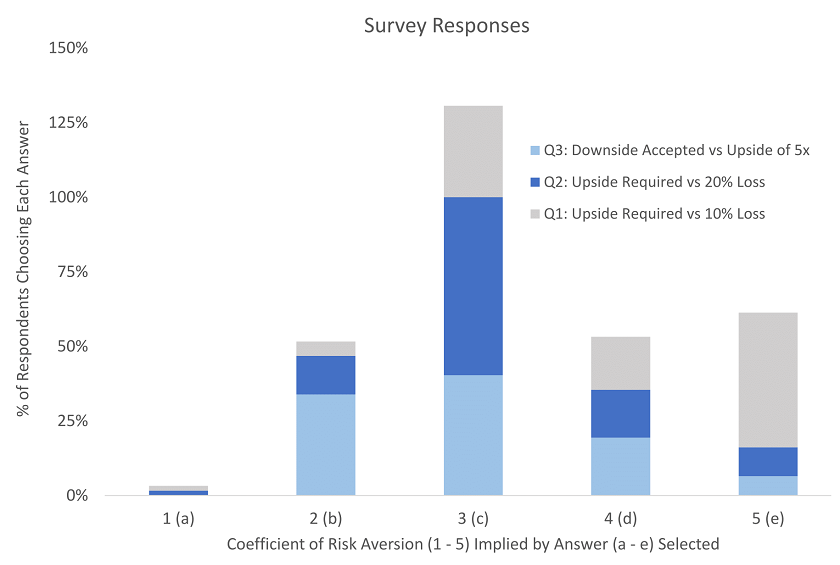 Here’s what we take away from the survey data and follow-on conversations:

We’d like to give a flavor for what’s implied by a risk-aversion level of 3. In line with the survey, an “ideal” investor with CRRA risk-aversion of 3 would never risk more than 30% of her wealth on an even-odds gamble regardless of the upside, and would need at least 50% of upside to risk 20% of her wealth. In an investing context under the most basic set of assumptions, such an investor would optimally invest 50% of her wealth if her only investment opportunity were a risky asset with an expected excess return of 4% and standard deviation of 16%.14 We look forward to writing a lot more about this topic in coming notes, using increasingly realistic sets of assumptions.

Before concluding, we feel a few caveats are in order. The thinking of our respondent group may not be representative of the broader population. Seven have PhDs in finance, and four have published relevant research papers. Caution is also called for in light of the extensive body of behavioral finance research, much of it in the area of Prospect Theory, which holds that people systematically make choices inconsistent with the classical utility functions that we used in our survey.15 Furthermore, psychological studies suggest that most of us are not very good at knowing how we’ll feel in different future scenarios.

However, there’s no escaping the type of questions posed in our survey if we want to make sound long-term financial decisions. An imperfect calibration of our preferences is likely better than no calibration at all. An approach that ignores or denies the premise of decreasing marginal utility of wealth will likely find itself trying to maximize expected future wealth, which can produce dangerous and nonsensical policy recommendations.16

We’ve been encouraged by the results of this survey and are looking forward to taking the next steps towards applying the valuable and extensive body of academic research to the real world financial planning and investing challenges faced by us all.