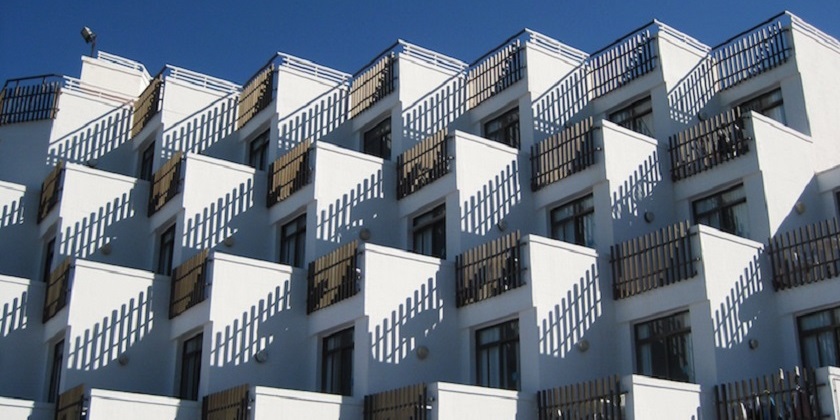 REITs have returned 17% in 2016, outperforming the S&P500 by 9%. There are several plausible explanations for REITs’ recent strength, such as this year’s 0.75% drop in long-term interest rates. A more intriguing explanation you may have heard about involves an upcoming change in how REITs are classified in indexes. Given Elm’s focus on index investing, I thought a brief discussion of this story might be of interest. I also provide our current view of REITs, from both a value and momentum perspective.

Real Estate gets its own sector

Real Estate gets its own sector
On August 31st, S&P Dow Jones Indices and MSCI will reclassify real estate companies out of the Financials Sector to a new Real Estate Sector in the Global Industry Classification Standard (GICS®).2 REITs were originally put into the Financials sector about 20 years ago when REITs were too small to warrant their own sector, and Financials seemed the nearest fit. The creation of this 11th industry sector just for REITs recognizes the tremendous growth in REITs to a roughly $1 trillion market segment3 and the expectation for their continued growth, as more and more real estate moves from private to public ownership.4 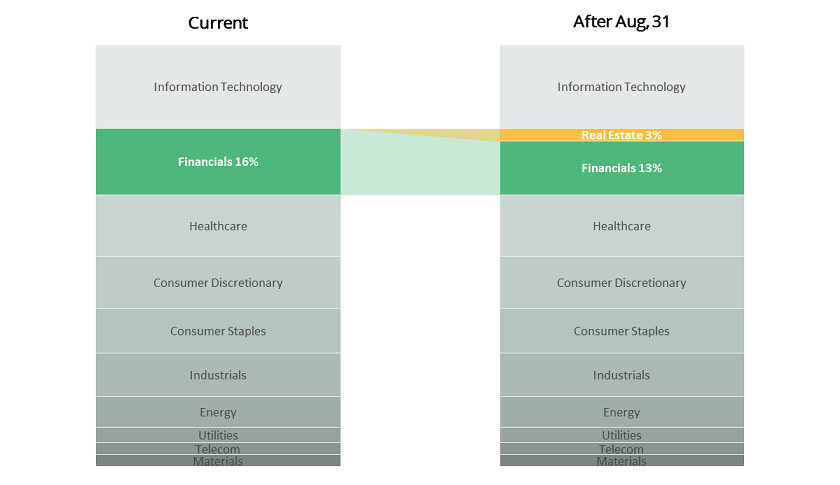 Impact on Active Equity Managers
So why might this index change be responsible for REITs’ recent market outperformance? The explanation starts with the observation that many active equity stock pickers manage their risk by keeping their portfolios within certain tolerances as measured against the GICS industry sectors. For example, they might want to keep their exposure to each industry within a 25% tolerance. With this new change in sector classification, their position in REITs will be explicit for the first time, and the manager might be compelled to buy or sell REITs to bring his portfolio into compliance with its risk limits.

The next question is whether active managers, as a group, are under- or overweight REITs relative to their industry weight? According to research by Morningstar and Bloomberg, actively-managed mutual funds are more than 50% underweight REITs, as shown in the chart below.5 There are a number of explanations for why these managers under-weight REITs as part of the Financial sector allocations. They may view REITs as being too sensitive to interest rates, too dissimilar to financials, overvalued (see further below for our view on REIT valuation), or just plain boring (aka low beta). In any case, once real estate becomes its own sector, these managers are likely to try to match the real estate weighting in their portfolio more closely to the index sector weight of 3%.

How big an effect might this be? Let’s say these active managers decide to reduce their underweight position from 50% to 25%. They would need to buy more than $100 billion of REITs, more than enough to give the sector a very noticeable lift.6

Actively-managed mutual funds are underweight more than 50% in REITs

Trapped, with no way out?
We may not need the Morningstar research to infer that active managers are underweight REITs. Why? Because the REIT sector is one of the most indexed of all individual market segments, making REITs more indexed than other S&P sectors relative to their sizes. REIT index funds own about $100 billion in REITs, or 15% of those in the S&P500. Vanguard’s REIT index fund alone owns about $60 billion of REITs.

If we view the market as made up of passive investors who own index funds and active investors who own individual equities, then unless REIT index funds shrink (and recently they’ve been growing), in aggregate, active managers are trapped in an underweight position of approximately $100 billion REITs.7 A recent academic paper titled Curse of the Benchmarks focuses on exactly this phenomenon. It argues that when active managers are measured against market cap weighted indexes, and a sector they are underweight outperforms the rest of the market, the dollar value of their underweight position increases and they are forced to buy that sector. This in turn increases their losses and exacerbates their predicament, leading to more forced buying. We have also written on this topic in our paper on Return Chasing, and drawn a link with how this can result in short-term momentum in stock prices, followed by longer-term reversion to fair value.

If anything, this problem is actually more likely to get worse in the near term. Having their own industry sector may further increase the size of REIT index funds. StateStreet, for example, recently created a new sector fund just for real estate, XLRE, which will start off at about $3 billion.8

The index changes we are discussing were announced in March 2015, so it is possible that much of the price impact has already taken place. However, Morningstar used data as of only a couple of months ago, and since that date REITs have not outperformed the S&P500. This suggests that this story has not yet played out in full. Stay tuned; given the size of positions involved, in the near or medium term, we may be in for some hair-raising appreciation of REITs, and more pain for active equity managers as a whole.

REITs from a Value and Momentum Perspective
Currently, we are slightly underweight versus our Baseline allocation, because we see REITs as significantly overvalued, but with positive momentum that partly reduces our desired underweight.

As REITs are required to pay out most of their free cash flow each year, our valuation of REITs focuses on dividends, rather than reported earnings, and we do not factor interest rates into the analysis.9 We feel that a 4-5% real return for the risk of owning real estate through REITs is fair, and a little lower than what we feel is fair for the broad equity market. Our evaluation of a fair return is not based on a historical average return, but rather what we think is fair compensation for bearing the risk of holding those assets, given what we guess is the risk aversion of many high net worth investors. Translating this fair return of 4-5% into a dividend yield leads us to a round number of 6%, as we assume that about 20% of the stated dividend is a return of capital10, leaving investors with a real return of 4.8% (80% of 6%), assuming that rental income grows with inflation.11

So how are REITs valued today? They paid a dividend of approximately 3.9% last year. However we like to look beyond just the past year of dividends. The inflation- adjusted dividend yield over the past 10 years is 3.3%. Comparing this 3.3% dividend yield to our fair dividend yield of 6% means that we see REITs as extremely overvalued. REITs would need to fall by 45% in order to deliver a 6% dividend yield, all else equal. Based on valuation alone, we would reduce our Baseline allocation to REITs by 60%.

And how do REITs look from a momentum perspective? At Elm, we compute our simple measure of momentum by comparing the current value of an asset to its average over the past 12 months, taking into account inflation and a risk premium. Currently, REITs are firmly in positive momentum territory at +15%, which, by itself, would cause us to overweight REITs by one third relative to its Baseline allocation. However, when combined with our view on their overvaluation, we currently have a roughly one quarter underweight allocation to REITs.12

Our positioning in REITs is consistent with the view that in the near term, REITs are likely to continue to deliver healthy returns as active managers try to reduce their underweight exposure, while in the long term, REITs will be repriced lower to provide a fair expected long term return, as the demand from passive and active REIT investors is eventually met through the persistent growth in the sector through REITs continuing to acquire privately held real estate.