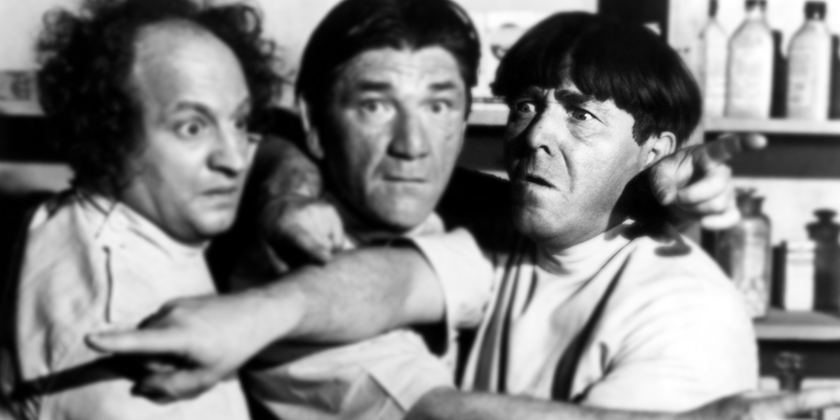 Most of us working in the finance industry are used to being regularly called on to predict where different assets are heading. We figure out pretty quickly that it’s impossible to know where anything is going with the degree of certainty that our inquisitors often seem to expect. But there are occasions, like a holiday dinner at your in-laws, when it just won’t do to answer with “I really have no idea” and then proclaim your belief in the Efficient Market Hypothesis. In this note, we’ll propose a solution: move the discussion to momentum (or “Mo” for short), and the light it sheds on the question being asked.

The harder it is to pin down the fair value for an asset, the handier momentum seems to be. Take Bitcoin, the epitome of an asset whose value is difficult to establish. Is it going to rival the value of dollars in circulation and gold above the ground, or is it headed to zero? You’d have been a hero if you’d told family and friends to buy some Bitcoin about six years ago when it traded at $20.2 It’s gone up about 150-fold since then, for an annual return of about 140%, or 8% a month. That seems about as good as it gets, but actually it’s not quite. If you were a Bitcoin know-nothing (like us) but you believed in momentum in asset prices, and especially in ones that are hard to value, then your advice would have made you an absolute legend. Owning Bitcoin only when its price exhibited positive momentum would have resulted in a 500-fold investment multiple with about the same volatility of returns as a buy and hold strategy.3 The momentum strategy that would have produced this return works like this: every month-end, if Bitcoin’s current price is higher than its average price over the past year, momentum is positive and you hold Bitcoin for the next month. Otherwise when its price is lower than its one-year average, momentum is negative, and you hold T-bills for the next month. The simulated returns we show in the chart below do not include transactions costs, but in the case of Bitcoin over this period the strategy would have only demanded a trade once every two years on average.

Natural gas is another trade that’s come up frequently over the years and is a good contrast to Bitcoin. What’s generated interest in this trade is the fact that the energy content of 1 unit of natural gas is about 1/6th that of a barrel of oil, and, over the past twelve years, the price of natural gas has traded at an average discount of 68% to this energy content-based “fair value”. 4 That’s about as cheap as an asset gets. In fact, it’s so cheap it strongly suggests an incomplete model. And indeed a little bit of knowledge can be dangerous: the popular natural gas ETF with ticker UNG became available in early 2008, and since then an investment in UNG would have lost 98% if held to the end of November 2018.5 That’s an annualized return of -30%.6 Ouch! Instead, as with the Bitcoin example, if you were oblivious of the “value” of natural gas but only conscious of the tendency of market prices to exhibit momentum, you might have saved your friends a fair bit of change. The same momentum-based approach as applied to Bitcoin, being long natural gas only during the roughly 20% of the time that momentum was positive would have resulted in a small gain over the period instead of a 98% wipeout.

So, if you find yourself at your office Christmas party or a family holiday dinner, pressured by etiquette to proffer an opinion about a speculative trade you know nothing about, tell your audience these twin tales of how Mo can make you more dough or save you from woe.7 In the true holiday spirit, you’ll have made the gift of a fishing rod rather than a fish. 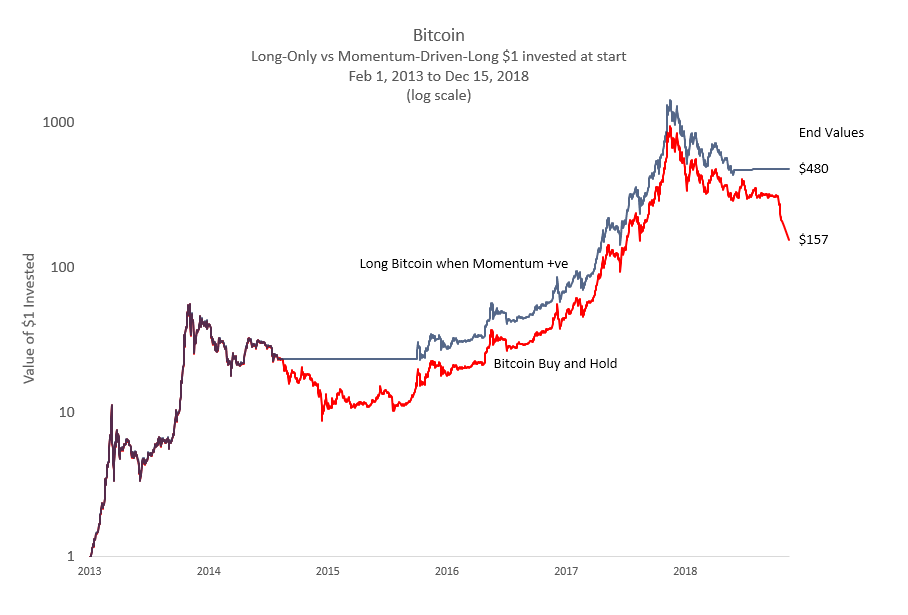 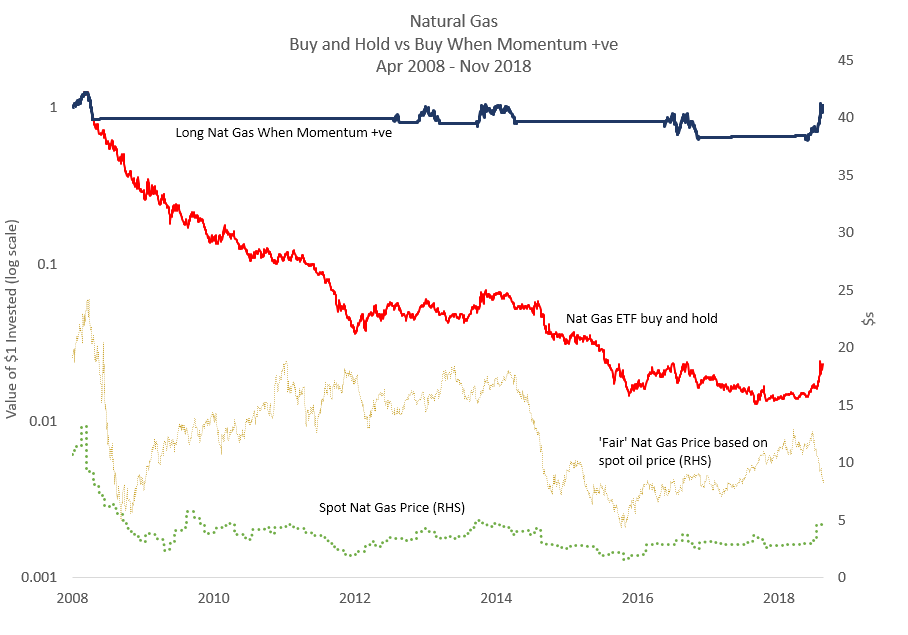