That was the only answer I had to each of my dad’s questions. It was very dark as we wandered the streets near my Upper East Side apartment in the early hours of October 20th, 1987, discussing the events of the prior day – Black Monday.

I was 25 years old and had been on John Meriwether’s Arb Desk for just over a year, following two years working in Salomon’s Bond Portfolio Analysis Group. My memories from the day the US stock market dropped 22% didn’t seem very noteworthy when my friend Rich Dewey asked to interview me for an article, Black Monday Revisited, he was writing for Bloomberg to mark its 30th anniversary. After all, compared to the other people Rich was interviewing—Paul Tudor Jones, Howard Marks, Stanley Druckenmiller, Ed Thorp and my former Salomon colleagues Eric Rosenfeld and Michael Lewis – what could I add?

I’ve been thinking that my recollection of some things that didn’t happen might be interesting. First of all, Salomon’s Arb Group didn’t do a single trade on October 19th, or pretty much for that whole week. It wasn’t that we didn’t see great opportunities, but rather that it was clear to everyone that this was a crisis and a time to preserve capital. Salomon was first and foremost a financial intermediary. Our capital was limited, and it would be sorely needed for providing liquidity to clients and projecting financial strength to all our counterparties. Salomon had about $3.5 billion of capital supporting a balance sheet of $100 billion. 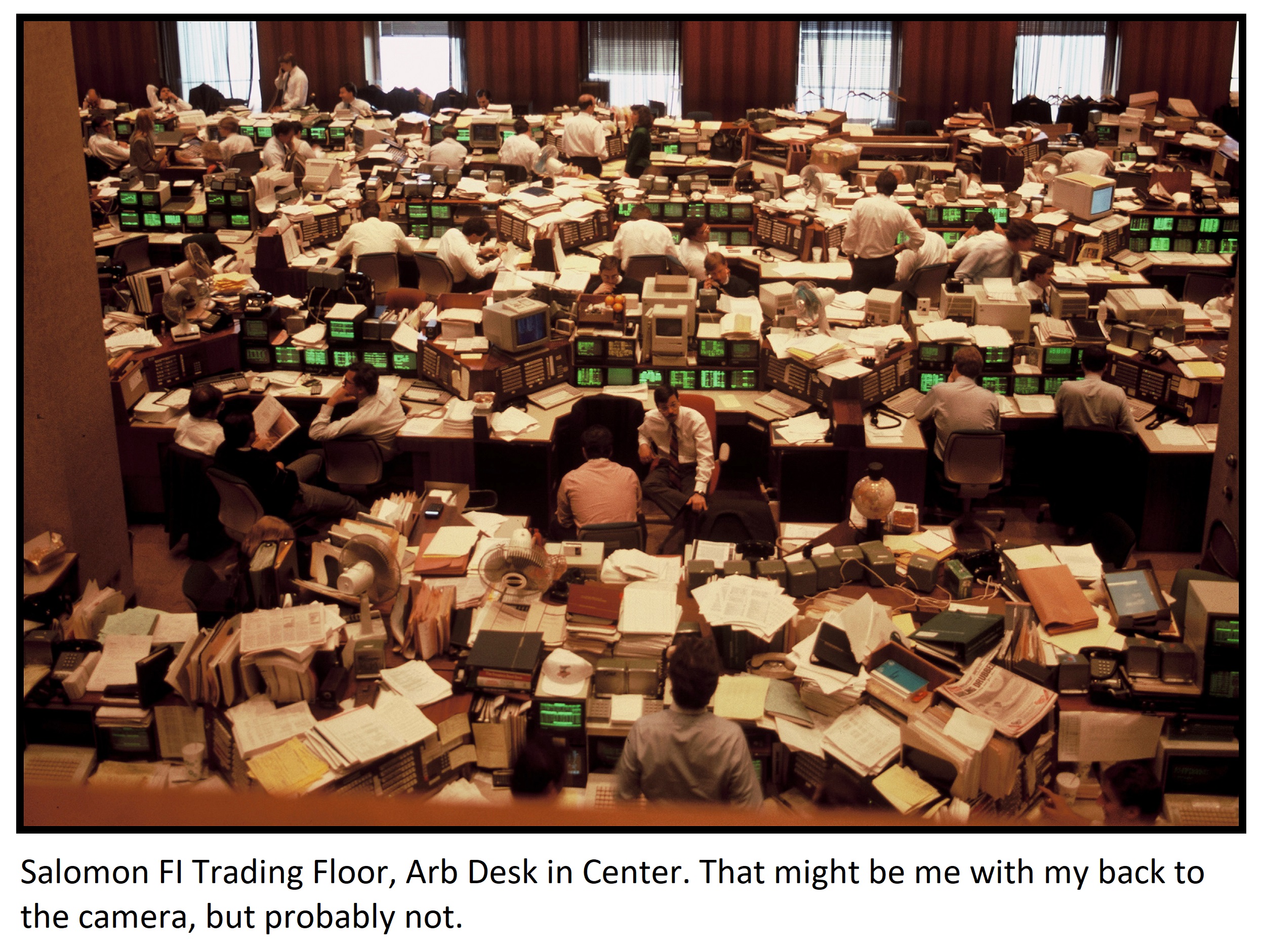 We borrowed money to finance our long positions in bonds primarily through the repo market, but we also had to borrow securities to support our short positions. When we shorted a bond, such as the 9.25% of 2/15/2016 that we were running a big position in at the time, we needed to borrow that specific bond from someone who held it in order to make good on the sale. We could borrow money from anyone– a client, a bank or as a last resort even the Fed. But the only party who could lend you a security was someone who owned it free and clear, and hadn’t lent it already. And the lending market was mostly overnight, so we had to roll every day.2

Our biggest fear was that clients who were lending us the securities we were short might ask for them back, forcing us to cover our shorts and unwind our trades. It’s almost axiomatic that when you’re forced to unwind a trade, you lose money on it. With these concerns in mind, John holed us up in a room off the desk, and we put our efforts into methodically triaging our portfolio. We kept the trades we’d be most able to hold to convergence, and cut the ones that were least defensible. We had been having a solidly profitable year up until October, but gave back most of our gains in the few days around Black Monday. The firm’s decision to let us keep our best positions was rewarded with a very profitable 1988.

The defensive orientation on our desk was echoed across the whole firm, and it was probably the same at Goldman, Bankers Trust and all the other trading houses on the Street. As a highly levered financial firm, dependent on short-term funding of our balance sheet, our crisis mentality was about surviving the storm, not trying to profit from it. While the most popular 1987 crash stories celebrate the trading acumen of the likes of Tudor Jones, Druckenmiller or Taleb, the less publicized story of how so much capital was constrained or frozen—an essential ingredient in all market panics– might be the more important takeaway.

Another thing that I don’t remember happening was an economic depression following the stock market crash. Well, I guess that’s because it didn’t! It was supposed to though, just as the Great Depression followed the Black Tuesday of October 1929. In fact, in December 1987, 33 prominent economists (5 with Nobel prizes) issued a statement predicting that “the next few years could be the most troubled since the 1930s.”3 The fact that we moved forward with barely a blip to the real economy makes us feel that October’s stock market crash was bogus, a market move that had nothing to do with fundamentals. But it didn’t have to turn out that way. It’s important to remember what didn’t happen: an alternative future in which the Fed didn’t act as it did (would Volcker have reacted as Greenspan did?), the stock markets fell even further, financial firms started failing, and we got a long and deep recession.4

Could it happen again? Of course it could. And it has. Extreme market moves of the magnitude of Black Monday’s 20-times normal daily move have occurred periodically since then, just not in the US equity market or on the one-day time scale. For example, two years ago, the Swiss Franc put in a 40 times daily upward move against the Euro when the Swiss National Bank suddenly abandoned the policy of capping its value.5 If we look at more arcane, but still important, markets, we find further examples, such as changes in swap spreads or long-dated equity volatility in October 1998 (what is it with October anyway?), or diversified equity momentum trading strategies that lost close to 90% in 2009, or the melt-down of equity quant strategies the week of August 6th, 2007.

Plus ça change. Humans, with all our behavioral foibles, are still important players in the markets. While the presumed cause of Black Monday, Portfolio Insurance,6 is now defunct, it has been superseded by vast amounts of capital dedicated to algorithmic trading or trend-following, both strategies expressly designed to make money, not to stabilize markets. Risk management systems based on VaR (recent volatility of positions) or a tight stop-loss discipline are inherently destabilizing too. And then we have the Volcker Rule and other post-financial crisis regulatory changes, which have the unintended consequence of dramatically reducing the ability and incentive of the banks to provide liquidity in normal market conditions, let alone in a crisis. What do we have against all this? More circuit-breakers and a tradition of Central Bank intervention to stabilize markets in every crisis since Black Monday.7 Hopefully, they will continue to do so, but we should be prepared for when they don’t.

You may wonder, how did this prepare me for another tumultuous October, eleven years later, when I was a partner at LTCM? Stay tuned, its 20th anniversary is just twelve months away.