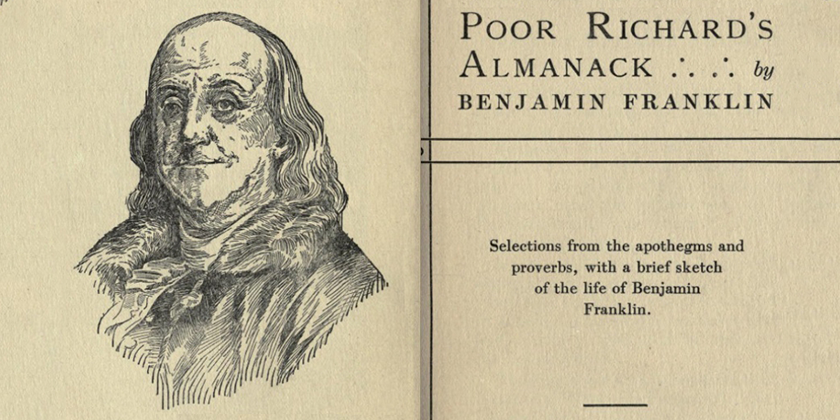 Most of us associate the maxim “A penny saved is a penny earned” with Benjamin Franklin, but what he actually said is far more insightful: “A penny saved is two pence clear”. By the time he penned this, in “Hints for Those That Would be Rich” of the 1737 Poor Richard’s Almanac, Franklin was an experienced businessman who understood the nature of risk and uncertainty. Although he didn’t elaborate on this pithy bit of advice, we think that he was trying to convey an idea much more profound than the simple identity expressed in the misquote. We believe he was getting at the notion that one risk-free penny saved is worth two pennies of expected but uncertain business income.

Ben Franklin was a man well ahead of his time: it wasn’t until about 230 years later that Paul Samuelson and Robert Merton arrived at the same conclusion using the tools of mathematical finance.2 Starting with the standard set of assumptions3 of a risk-averse investor and a single risky asset, they showed that if the investment in the risky asset is “perfectly” sized, the investor should be equally happy with a riskless investment delivering half the expected excess return of the investment in the risky asset.4 We could also say that under these circumstances, the investment’s “risk-adjusted return” is equal to half its expected excess return.

When Fees Saved are Worth More than Uncertain Extra Expected Return
One intriguing implication of this idea is that 1% more in investment management fees requires more than 1% in extra expected return, if getting the extra expected return increases the risk the investor is bearing. Just how much extra expected return an investor needs in order to offset the certain cost of higher fees depends on how much extra risk the manager has to take. For example, say an investor is considering moving from an index fund into an actively managed fund that charges 1% more in fees. Also assume that the index fund has a risk of 16%, but the active fund has a higher risk of 19% because it’s trying to generate higher returns by holding a more concentrated portfolio of stocks. In this case, the active fund needs to have a pre-fee expected return about 2% higher than the index fund to make the investor indifferent between the index fund and the active fund, a modern-day illustration of Franklin’s maxim.5

Conclusion
Philadelphia’s most famous resident tirelessly promoted the virtues of efficiency and rational thought which contributed so much to America’s economic success. It’s inspiring to realize that some of his ideas wound up being proven correct using mathematical techniques developed over 200 years later. Ben Franklin was a successful entrepreneur and his insight about the relative value of risky versus risk-free sources of return was developed in that light, but we see that it still has high practical value today for investors and business owners alike.

Appendix: A Slightly Deeper Dive
If we start with a risky portfolio which follows a geometric random walk,6 and then graph the relationship between Expected Excess Return, Risk-Adjusted Return, and the Price of Risk, it looks like this:

Now we can also see that at the 50% point, Risk-Adjusted Return looks like it’s about half of the Expected Excess Return. In fact, it’s exactly half. In the theory of financial decision-making under uncertainty pioneered by Samuelson, Merton et al., there’s a result that within a standard set of assumptions the optimal Risk-Adjusted Return will always equal half of the Expected Excess Return at that optimal wealth allocation.7